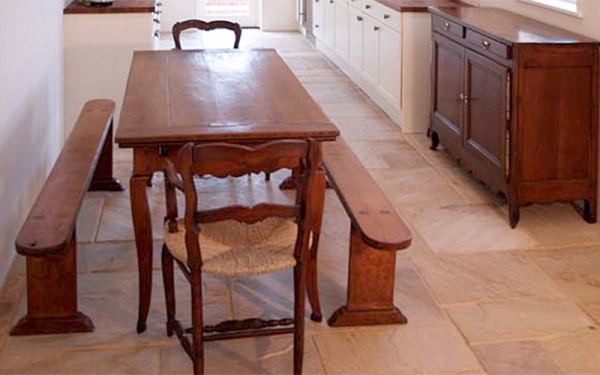 Antique French and English Country Furniture – “JOIE DE VIVRE” (Joy of life) must be the quintessential phrase to sum up the philosophy of the French way of life. This not only becomes apparent in their food, their décor but also in their furniture. The influence of the French craftsmen is with us in our furniture and our architecture having being contributed by the itinerant craftsmen whom have plied their trade across Europe over the centuries.

Over the years a vast quantity of time and effort has been lavished on creating various pieces, some simple in design, while others elaborately carved or decorated so as to exhibit both the skill of the craftsman and the wealth of the client.

French country furniture was originally made to be used during the course of everyday living and not to be treated as museum pieces. The varying styles and timbers used both enhance and echo the  creativity and skill of the craftsmen that originally made these pieces. Cherry, oak walnut, elm ash and chestnut are to name but a few of the indigenous timbers used to create these pieces, each one being as individual as its creator.

The beauty of  French country furniture is that it is as equally at home in a period environment as an ensemble or as a single item in a more contemporary setting. A well built piece, due to its style and construction can appear to be substantial yet also delicate. Use of an antique table in a contemporary kitchen, is a prime example.

Please enjoy your French country furniture, as each piece is unique and comes with its own varied history.

Wildwood has, over the years, adhered to specialising in buying and selling 18th and early 19th century furniture. If a  special piece comes to light, later than this period, it will be dated accordingly, so as not to mislead as to it’s authenticity.